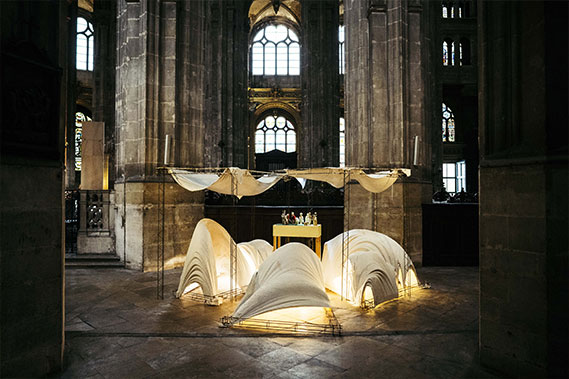 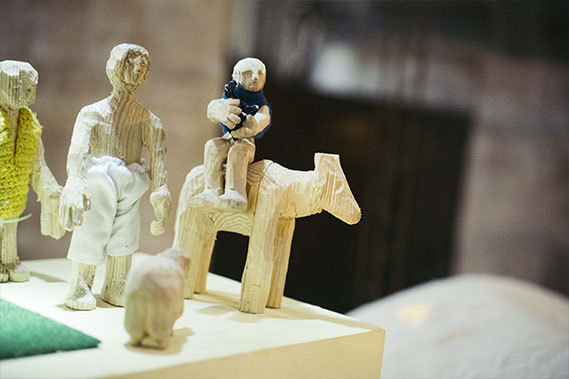 Born in Strasbourg in 1994, Max Coulon enrolled at the École des Beaux-Arts in 2014. He spent two years working in James Rielly’s studio, before moving onto the studios of Dominique Figarella and Pascal Aumaitre. His practice of wood carving becoming more and more important, he joins Stephan Balkenhol’s studio at the Staatliche Akademie der Bildenden Künste in Karlsruhe.
“My work comes across as areas constructed and occupied by all the whims, misappropriations, step sideways, rituals and superstitions which make up my personal mythology. These installed-sets are an expression of my movements of thoughts and childhood games.”

Théophile Stern was born in 1990 in the Beaujolais region of France. He enrolled at the École des Beaux Arts in Paris in 2013, in Pascale Marthine Tayou’s workshop. In 2015, he presented an installation at the University of Paris-Dauphine and took part in the Paradis culinaire exhibition at the Purgatoire gallery, in partnership with the Musée de la Chasse et de la Nature (Paris). In 2016, his work was shown at the Galleria Continua (Les Moulins) as part of the Tayou workshop’s Explosition exhibition. In 2018, he took part in the Seuil exhibit at the Galerie du Crous in Paris.

To celebrate the feast of the Nativity and under the initiative of Françoise Paviot, in charge of contemporary art within the parish, Rubis Mécénat cultural fund and St. Eustache Church renewed for the third year in a row the call for projects for the realisation of a contemporary crib proposed among the students of the École des Beaux-Arts.
The young artists Théophile Stern and Max Coulon, winners of the two previous editions, present this year a joint project. Their contemporary crib will be visible from 2 December 2018 to 3 February 2018 at St. Eustache Church.
They have very diverse aesthetic and spiritual backgrounds, but these differences inspired their desire to create a new work of art. One of them is carving small limewood figures, and the other is creating a huge plaster and metal sculpture reminiscent of sand dunes in the desert, the intersecting ribs of gothic churches, or urban building sites on our housing estates. In this space, simple, self-effacing people remind us that a crib is not restricted to a circumscribed area.